Tomoko Otake for The Japan Times

Nearly 300 spectators cheered wildly as disco music blared. A spotlight picked out two fighters approaching the ring to kick off a puroresu (prowrestling) event held recently in a Tokyo town hall. Then a female MC announced, in a startlingly high-pitched voice: "In the blue corner, E.T.! In the red corner, Arm Bomb Fujiwara!" Both wrestlers were physically handicapped and had to be helped or lifted into the ring. But when the starting bell rang, the men -- both of them sitting and rolling around on the canvas -- began punching each other with all the power and accuracy they could muster.

Blows landed thick and fast, and the crowd roared. Then Arm Bomb Fujiwara got his arm round E.T.'s neck and began to throttle him. As E.T.'s face reddened to puce and he started shaking, the referee called a halt to the bout and declared a win for Arm Bomb -- who raised his fist high as the crowd laughed and shrieked.

That night, many of the dozen disabled wrestlers from the Doglegs group that staged the show in western Tokyo's Shimokitazawa district looked truly fired up and fearless. In melodramatic contrast, the few able-bodied participants were wimps, including one going by the name of "Mushikera Goro (Worthless Goro)" who, according to the program, was a hikikomori (long-term stay-at-home recluse) with a big-time Oedipus complex. He lost out to 41-year-old "Anchi-teze" (Antithesis) Kitajima, the broad-shouldered nondisabled man who is also Doglegs' leader.

But why stage contests in which one or both participants are so clearly disadvantaged? What is it all about?

"That's our intention -- to make people think," said Doglegs' leader and cofounder Kitajima -- real name, Yukinori Kitajima -- who makes a living not from running Doglegs but from writing fiction and computer-game scenarios.

Speaking after the two-hour event had ended, the father of two young girls said that over the past 15 years the group has performed around 70 times all over Japan, and once in South Korea. Then he explained: "We don't want to show something for people to simply laugh at and walk away. You might get a laugh out of our matches at times, but we also want people to wonder what this all means. We want to give people a nasty aftertaste."

Here is the artists’ page, and here is a blog post which has helpfully put most of them on one page for easy viewing.

Interview at BME with "One Hand Jason":

I’m one of those body-integrity-disorder (BIID) dudes. As long as I can remember, having two hands was a defect in my body — something that was not meant to be. For me philosophically, it’s totally different from body mods, which I also have. I don’t think I had any choice. My right hand just didn’t belong to my body. 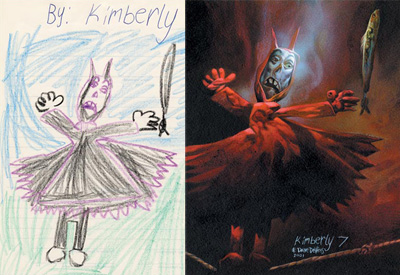 As a parent, I can attest to the wild imagination of children. I was a kid once too, and I remember. David Devries from South Orange New Jersey remembers too and transforms the drawings of children - with their wild imaginations for conjuring up monsters, superheros and creatures - into “adult” versions of their art.

No, there are no speakers.

Via Beyond the Beyond.

The publishing outfit that produced LaRouche propaganda finally collapsed, and the whole organization probably will follow. Avi Klein has an interesting look back at the remarkably little impact LaRouche has had on american politics, despite the millions spent.

Posted by Kenny G to WFMU's Beware of the Blog.

Composer Thomas Dimuzio has taken this classic rock tune, reversed it, cut it up into quarter-notes and then reassembled it in forward order to retain the melody.

Seems like this would be a good headfuck when you are tripping.

There is nothing more to read, but you can go read it at WFMU's Beware of the Blog.

That’s Reiser of ReiserFS. I could care less, except it prompted Auslander to point out that if the brains of ReiserFS is behind bars, you might get a situation where

a bunch of kernel committers [are] trying to get information about FS design out of hans while he serves his prison term. Something like a dorktabulous “Silence of The Lambs” comes to mind.

It might have ended there, another high-flying company with big ambitions and a lousy product. But the crash put a spotlight on Eriksson and raised a series of questions: Who is he? What kind of person drives nearly 200 mph on a coastal highway? The answers led to even more puzzles. In just a few years, it seems, Eriksson went from languishing in a European jail cell to making millions as a tech executive to, even more improbably, becoming deputy commissioner of antiterrorism for an obscure Southern California transit police force.

Update: Joe Sharkey of the NYT who was on the executive jet, tells his story.